In a surprise move, the City of Asheville decided to drop the property tax rate to revenue neutral at 3.95 cents and review its budget to cut waste and over spending.

Why? It's Christmas in July except it's just April!

Despite all of this, the City Council is actually considering increasing property tax rates above revenue neutral.  How do we know?  Councilman Gordon Smith outlines the reasons why:

"..stuck in an impending sense of scarcity" - Councilman Gordon Smith 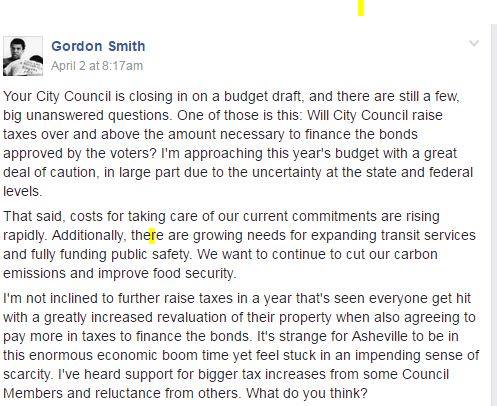 1) The cost to finance and initially startup the $74 million bond package voters approved last November, the City would need to add an additional 3.5 cent tax. This was determined when the bond package was put forth to taxpayers back in November.

2) The cost of paying the debt payments on the City's current debt is rising. The City currently pays $12 million a year in debt payments for bonds it issued in the last 2 years ($48 million). No mention yet as to how much this will be in 2017.

3) The City is projecting an additional $1 million increase of the Transit budget.

5) Lastly, but not mentioned, the City has no idea what the RADTIP project will cost to construct but at the very minimum it will be around $20 million.  Final bids will be approved in June.

Joel Burgess of the Citizen-Times recently wrote an article entitled, "How Asheville does (and doesn't) tax you." In a recent budget meeting, both Mayor Manheimer and City Manager Gary Jackson, commented that "this was not an equitable budget" and the City gets no benefit from all the business growth, only the business costs such as increased tourism on our streets and crime.  What they were lamenting about is not getting any part of the hotel tax, forgetting that it is this SAME City Council that has approved the last 7 new hotel projects.  The City has also forgotten that business owners pay property taxes, larger rates on water and stormwater, business licenses fees, development fees, etc.  Most importantly, the City has forgotten that it is these businesses - beer, arts, restaurants, etc. that make Asheville attractive to so many visitors.

This week, the same local media published an opinion article by "Guest Columnist" Rich Lee, "At budget time, all hands on deck".  The Citizen-Times failed to mention that he is a candidate for City Council but did note his role on two City commissions (Greenways and Multimodal - the same commissions responsible for a huge chunk of the city's spending).  In the article, Rich Lee lays the groundwork for blaming the Federal government who is cutting funds for transit over the next 3 years (not all in one year).  Councilman Gordon Smith has already  mentioned these cuts during the budget worksessions held in March and April. (It's like these two work together.)

In an odd twist, proponents of the $74 Million Bond (City Council and admittedly, Candidate Rich Lee ) are beginning to fudge the truth saying that no bond money has been spent and because of the bond lawsuit, the City will pay higher interest rates. Does Rich Lee, a financial advisor with Edward Jones, have the inside scoop on bond interest rates? If he is elected, can he buy the City bonds?

The City predetermined the amount of tax it would need to raise if the bonds were passed last year based on different tax revaluation scenarios. Council has already declared during its budget worksessions that it is going ahead with adding a 3.5 cent tax to pay for the bond costs and this was the projected cost all along, with or without a lawsuit.  Furthermore, Asheville Unreported has learned that this tax will be collected and put in the general fund wherein the City can immediately begin using it despite any lawsuit. It is not required that the City put these funds in a separate account. In other words and to be clear, the City gets its bond monies with or without the lawsuit.

4) Blame the police and the low income transit riders

Last, but certainly not least, the Council looks to blame its own police force and the low income transit riders.

Citing massive overtime, the City could spend another $1 million over the next few years and cut back overtime by $300K+ a year.  It could also manage all these tourists and new districts (South Slope was mentioned several times) that are becoming hot spots for activity.  Although Asheville has an "A" for beauty, it has an "F" for crime. Seems like doing something about that part of the report card makes sense but why blame them?

On the transit side, the City cites demand for expanding services and hours although the last time it did a transit study was in 2009 and since then it has failed to keep up with the purchase of new buses or maintenance.  In addition, the $1 million increase will NOT go directly toward expanded services but to the cost of the contract to manage the Transit - we are assuming this means more drivers and more time but that was extremely unclear during the budget worksession. In fact, many details were unclear.

The question is, who is really responsible?  The City's management and leadership:


These are just a few examples and the tip of the iceberg in municipal financial mismanagement.  A legacy of massive debt and massive salaries are responsible for what Gordon calls the "impending sense of scarcity" in our City budget.