Spin Makes the News Go Round

The Late, Great Citizen-Times
These days “The Voice of the Mountains” is neither.
PART TWO OF TWO
Click here to read Part One
By Roger McCredie

Spin Makes the News Go “Round 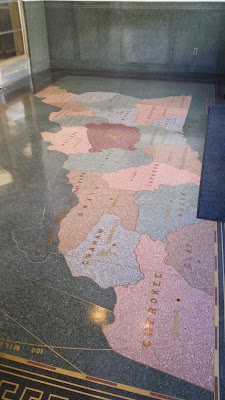 “I am fully aware that members of the business community consider the Asheville Citizen-Times a liberal rag. I have made some adjustments to our editorial positions. I am making some adjustments to the editorial board. I am probably bringing the paper slightly back towards the center from where it is. I’ll probably never go as far as you guys would like me to go.”
--Jeffrey Green, then-Publisher of the Asheville Citizen-Times, to the Council of Independent Business Owners April, 2007
All newspapers have opinions.  In a perfect world they are expressed on the editorial page.  But human nature being what it is, journalists’ biases frequently bleed into what’s supposed to be objective news coverage.  When that is done intentionally, so as to control or even reshape a narrative, it’s called spin.  Critics say the Citizen-Times’ spin-o-meter has been running past the red line for more than a decade, driven by incomers who are less interested in informing their readers than in advancing an agenda.
Evidence to support the accusation isn’t hard to find.  When the AC-T gets the bit in its teeth about an issue, the line between reporting and editorializing becomes blurred indeed.  Moreover, the paper’s news crew uses several techniques – not very subtly -- to put across its version of events.
One is selective reporting.  Last fall, for instance, a 69-year-old woman, Shirley Teter, claimed 73-year-old Richard Campbell struck her during a Trump rally at the U. S. Cellular Center. The AC-T’s Joel Burgess dutifully reported Teter’s “experience … that ended with a man punching her in the face,” and said eyewitnesses confirmed that account. Second-hand news reports based on the AC-T’s narrative were carried by national news outlets.

A few weeks later an undercover video surfaced in which Scott Foval, a consultant to the Democratic Party, appeared to say that Ms. Teter was in fact a “trained” political activist.  Further, other witnesses, not mentioned by the AC-T, stated Teter had initiated the contact with Campbell, who was startled when she grabbed him from behind and jerked away from her; Teter, off balance, stumbled and fell, these witnesses said.

Immediately following the emergence of the video, several national news sources reported that Teter was backpedaling, saying it was “possible” Campbell had struck her accidentally.  Nevertheless, Campbell was charged with misdemeanor assault.  His case has been through several continuances and is now set for trial later this month. But as of its own latest coverage of the incident, on March 16, the Citizen-Times has yet to mention Teter’s change of story.

Another AC-T narrative technique is Bandwagoning, which involves taking a story that will likely appeal to readership and giving it heavy and repeat coverage regardless of its intrinsic news value.  Recently Spicer-Greene, the Tiffany’s of WNC jewelers, posted a billboard showing an array of gemstones with the caption, “Sometimes it’s okay to throw rocks at girls.”  A Facebook member posted a picture of the board online, sparking an immediate and furious reaction.   The ad was called “horrifying” and was denounced as fostering “a culture of violence against women.”

The Citizen-Times was on the story like a duck on a June bug, and was careful to point out that Spicer-Greene had, in at least two other instances, used copy lines that had been objected to as “sexist” because they appeared to promote heterosexual over same-sex marriage. The story was picked up by national media, including the Washington Post  and the “Today” show. The Huffington Post’s pickup led with the headline, “Tone-Deaf Jewelry Ad Tells Customers To 'Throw Rocks At Girls' ”  In each case the Citizen-Times was duly acknowledged.

The paper supplemented its news coverage by giving Spicer-Greene a grade of “F” on its editorial “Report Card.”  “There are better ways to sell diamonds than relying on misogynistic clichés,” the paper said primly. Meanwhile, the majority of public comments on other sites (such as WLOS) thought the reaction was over the top, even for political correctness.

Then there’s the Just-Make-It-Up approach, as with Lisa Baldwin and her alleged Nazi salute.

As the lone and outspoken conservative member of the Buncombe County Board of Education, Lisa Baldwin found herself continually at odds with her colleagues, especially Chairman Bob Rhinehart. At one meeting, when Rhinehart cited a policy point in an attempt to curb Baldwin’s constant fact-checking, Baldwin snapped, “The next time I come in here, do I have to say, ‘Heil Hitler’?” Next day a report from the Citizen-Times’ Casey Blake carried the headline, “School Board Member Mocks with Nazi Salute,” claiming Baldwin had used the gesture as she made her comment.

The salute allegation went viral and touched off a firestorm of criticism on social media sites. Letters to the AC-T castigated Baldwin for improper conduct and lack of sensitivity. Citizen-Times columnist John Boyle accused her of “trivializing the Holocaust.” Baldwin’s fellow board members received an anonymous letter calling for her to be censured on record.

Thing is, the salute never happened.  The meeting had been videotaped, with Baldwin in the frame at all times.  A frame-by-frame analysis showed she made no gesture at all, let alone a Nazi salute, while speaking.  Boyle, when pressed, said, “Well, the video is inconclusive. But she shouldn’t have made the Hitler reference.”  Blake made no comment.
Loftier Issues
One recent Sunday (March 19) the AC-T treated readers to a look inside its corporate head with a double dose of outrage.
The paper’s lead editorial was a howl of protest against the forces advocating repeal of Obamacare – although the paper somewhat undermined its broadside by opining, further down, that it would never happen.  The piece itself was unremarkable but once again the headline was the hook.  It read: “ ‘Conservative’ Doesn’t Have To Mean ‘Heartless’.”
And over in his own column that same day, John Boyle’s mask of genial condescension slipped.  Apparently smarting from a political argument with a family member, he lashed out at conservatives in general, saying they “have always wanted: to keep things exactly the same, and that means no progress.”
He went on:  “They've opposed freedom for slaves, opposed the Civil Rights Act of 1964, opposed women's voting rights, opposed the 40-hour work week and restrictions on child labor (really, they oppose anything that can cut into profits, including nearly all regulation) …”
And meanwhile, back in WNC …
Just inside the front doors of the Citizen-Times building, set into the floor, is a giant map of Western North Carolina, each county a different shade of polished granite with its name in brass: Clay, Swain, Polk, Avery … all those places the AC-T boasts of serving.. And a nearby wall proudly displays the masthead:  Asheville Citizen-Times/Voice of the Mountains.
The grand old slogan has become a glib management mantra.  In the wake of last October’s newsroom purge, newly arrived News Director Katie Wadington – who some speculated had been promoted to conduct the herd-thinning – stated:
“On Wednesday, we will regroup, still intent on giving readers in-depth coverage of the Asheville area, telling its stories and being its watchdog. Our front page says we are the ‘Voice of the Mountains,’ and we still be that voice.”
But outside the greenway belt, from Old Fort to Robbinsville, and in city neighborhoods where life is not all bikes and beer, the voice seems mighty quiet.
So quiet you can almost hear the ordinary people of Western North Carolina murmuring, “What happened to our voice?”