"Asheville gets twice as many tourists as Charleston" 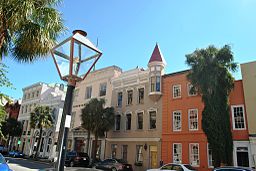 Over the last year, Mayor Esther Manheimer has repeatedly stated that Asheville gets twice as many tourists as Charleston, stating Asheville gets 11 million visitors a year while Charleston gets half of that. According to her figures that would mean approximately 30,100 visitors each and every day, 365 days a year. She's seem stuck on this information. She used these figures during budget discussions and during the $74 million bond referendum meetings to justify the ever increasing debt the City is taking on.  We decided to take a closer look.

We first noticed it during the initial public meeting last October about the $74 million bond referendum as a reason why voters should pass the bonds.  She said it again during the first and third City budget worksessions in March and April, stating it was unfair that the City doesn't get any of the benefits of the growth of downtown businesses, only the costs (higher crime and wear and tear on our streets and sidewalks). And, finally, at the May 23rd council meeting held for public comment about this year's $175 million budget she repeated it with an explanation:


(1:51 in video)... (summary) The room tax which is now 6 cents does not flow directly to the City and the City has no authority over that.  The TDA's required mission by statute created by the legislature is to promote tourism in this area but they do get to use 1.5% to go into a fund for cities to apply for capital projects (capital costs only, not for personnel). This has definitely created a hardship for Asheville because cities like Charleston are able to use their room tax for safety such as costs related to policing.  We have a lot of tourists in our town and actually Asheville has double the number of tourists that Charleston does. We are now at 11 million tourists and Charleston has half that amount.  (Click here to watch and listen to the video)

Visitors vs. Hotel Stays reflect different numbers
To correct the Mayor, the visitor data she cites actually  refers to all of Buncombe County, not just City of Asheville. Buncombe County includes municipalities with their own government and budgets - Biltmore Forest, Black Mountain, Montreat, Weaverville, and Woodfin.  Asheville does have attractions such as the Biltmore Estate, Grove Park Inn and the many parks and mountain trails associated with the Blue Ridge Parkway that attract many visitors. Buncombe County estimates 11 million visitors but can only verify with real data the number of overnight stays (hotel stays) as 3.8 million. Comparing that figure to Charleston, the Charleston Chamber reports an additional 1 million overnight stays.


Mayor should look beyond tourism

Our Mayor focuses on tourism, the kind of focus that has kept Asheville a mountain tourism town instead of focusing on creating a thriving business sector with year round, well paying jobs.  Perhaps she should review the other economic data that differentiates Charleston from Asheville.

Charleston has a very active tourism industry like Asheville, but Charleston also has a successful and growing manufacturing business sector (Boeing, Blackbaud, Nucor Steel, Volvo, etc.), which between 2015 and 2019 is projected to bring 25,000 new jobs to the area.  It is also one of the top 100 metro cities in the nation in Advanced Industries Sector growth.

Approximately 34 people a day move to the Charleston Metro area compared to about 3 people a day that move to the Asheville area (Source: Citizen-Times).  Combined with the growing manufacturing industry, people are flocking to Charleston as permanent residents with high incomes spending their dollars in the Charleston area. They also have a thriving port business, cruise business and medical/healthcare business.  The City of Charleston alone has 8 colleges and 3 major medical centers in addition to the highest density of retail and restaurants in the area.


Millions in airport traffic vs. Asheville's less than 1 million

Asheville's Regional Airport had 826,648 passengers fly through in 2016 while Charleston will have an estimated 3.7 million passengers in 2017.  The numbers speak for themselves.

Perhaps the Asheville Mayor should pay more attention to the City budget and how it compares to the City of Charleston.

What is surprising is that given the size of Charleston (twice that of Asheville in all respects), it does so with a manager/Mayor that earns less than Asheville's City Manager.

The Charleston City budget is only $64 million more than Asheville. That sounds like a lot but in one year, Asheville added $74 million to its debt with the approval of the bond referendum in November and an additional $10 million in salaries and benefits within a year and a half.  At this pace, Asheville's budget will exceed Charleston in a few short years though we employ far less employees and cover less than half the sidewalks and streets that Charleston maintains.

The Most Important Difference is Governance, Leadership and Management

Perhaps the biggest difference between Asheville and Charleston is in governance and it's a difference the Mayor should pay more attention to especially as she runs for re-election this year.

Asheville is led by a Council-Manager form of governance which means the City Manager, Gary Jackson, can only be terminated by the City Council.  He does not answer to taxpayers and he can stay there until and unless they terminate him or he voluntarily leaves.

Charleston is run and managed by a Mayor-Council leadership where the Mayor is full-time and must be elected by voters every four years. Their Council is also elected from districts so both the City Mayor who runs the City AND their Council answer to voters.  In short, their "manager/Mayor" and their Council must answer to voters, a striking difference between the two cities.

This difference is best seen in comparing the two salaries - Asheville's current city manager, Gary Jackson, was making an annual salary in 2015 of $183,968, not counting fringe benefits which adds another 30%.  The same year, Charleston's Mayor was only making $163,000.

So, while Asheville's Mayor can try to keep voters distracted with tourism numbers that don't compare apples to apples, perhaps she should be looking at the bigger picture of differences - city management, governance, fiscal responsibility and leadership, all of which have led to one of the fastest growing cities in South Carolina with permanent business development and growth.