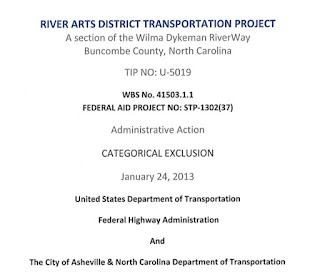 (NOTE: Asheville Unreported has been reporting on this boondoggle project for the last 2 years (see also AshevilleRivergate.com).  The Mayor shouldn't be shocked since Mr. Chris Peterson warned them of rising construction costs over a year ago during the May 2016 City Council meeting. It is our belief the $74 million GO Bonds were planned for RADTIP costs.)

That loud scraping noise you may have heard downtown last Tuesday was the City of Asheville’s flagship development project running aground on the shoals of a massive -- and apparently totally unexpected – construction cost overrun projection.

The $26 million underestimate is already being called the biggest city financial boondoggle in recent memory. It sent council scurrying to approve a budget addition of $6 million so that it could save a $14.6 million federal grant that is the linchpin of its treasured River Arts District Transportation Improvement Project (RADTIP).

And nobody seems to know how it happened.


Of time and the river

The city manager’s office received bids for the RADTIP construction in May. Council passed the new city budget at its meeting on June 13. Neither during that interim nor at the council meeting was mention made of any financial wild card that could have affected the RADTIP work’s previous $50 million price tag so dramatically. The new reckoning puts anticipated costs at $76 million -- an increase of 52% over that figure -- of which the city (and its taxpayers) would be responsible for another $26 million. Which it doesn’t have.

Records show that on June 15, just two days after the budget was adopted, Deputy City Manager Cathy Ball assured the Buncombe County Tourist Development Authority, which has chipped in $1.8 million in hotel tax money towards the RADTIP project, that the city fully intends to go forward with development of the east bank of the 2.2 mile French Broad Riverfront greenway, plus a botanical garden, a “community plaza” and a boat ramp.

But those are only part of the suite of projects that made up RADTIP. So, given that the bids were received in May, was the city manager’s office already aware of the projected overage at the time the budget was passed?

That much is still unclear (see “The $26 Million Disconnect,” below) What was made clear at the June 27 meeting was that council needed to contribute another $6 million, and it needed to do it then and there because shovels needed to start turning on the river no later than August 1. Or else the TIGER VI money would … well … go away.

“I need something I can sign tonight,” Ball told council.

TIGER (Transportation Investment Generating Economic Recovery) is a federal discretionary grant program that was founded in 2009 to provide supplementary funding for “surface transportation projects.” The Roman numeral suffix denotes the year following 2009 that the grant is awarded; hence, when Asheville received $850,000 worth of TIGER funds in 2010, the grant was titled “TIGER II.” That grant became the seed money for RADTIP.

TIGER VI grants, therefore, were awarded during 2014; in September of that year one of them ended up on the City of Asheville’s doorstep. There was general rejoicing at City Hall. An entire city department was created to implement RADTIP. Even as the original $50 million price tag emerged in 2015, the city was supremely confident. It could count on a $1.3 million public works assistance grant from the U.S. Economic Development Administration; a $4.2 million grant from the state DOT / French Broad River Metropolitan Planning; $1.1 million in other state grants; $1.8 million from TDA; a $300,000 direct contribution from Buncombe County; and $800,000 in retained TIGER II funds.

That same year (2015) the city let its bids. The clock ticked quietly away on the TIGER VI’s August 1, 2017, must-start deadline. It is not known whether, over the next two years, anyone was keeping an eye on increases in area construction costs, but subsequent events suggest not.

Which is how it came to pass that on the evening of June 27 Cathy Ball took Gary Jackson’s accustomed seat on the dais (Jackson wasn’t in the house) to report that the city needed more money. And to say how much of the original RADTIP plan would have to be jettisoned to keep the ship afloat.

The bottom line, Ball said, was that several items would need to be gutted from (she said “delayed”) the RADTIP suite of projects: namely, development of the French Broad Greenway’s west bank as well as all plans for creating the proposed Town Branch and Bacoate (formerly Clingman Forest) greenways.

The work she had outlined to TDA on June 15 could go forward, Ball said, plus two traffic roundabouts, road realignment on Riverside Drive and 1.5 miles of new sidewalk, mostly on Lyman Street – provided the city could promise another $6 million. Immediately.

The discussion that followed, observers said, dramatically illustrated what has been called “the ongoing disconnect” between the city manager’s office and city council.

Vice Mayor Gwen Wisler congratulated staff on its “thoroughness,” but said she had “concerns about transparency and equity” in the bid reviewing process. She called Jackson’s office’s work “stellar up to a point,’ but, she said, “When the bids came in it felt like radio silence.

“Why didn’t the staff let the council and the public know about the size of the overrun and allow the public to weigh in on the portions of the project that were being delayed?” Wisler asked. “How are we going to make sure the public has a real chance for input in the choices that are being made going forward? How do we make sure that an equity lens is being applied in completing this project?”


Noting that at present the council’s only direct input from city staff happens on days that city council meets – every two weeks – Wisler said, “… I’m taking this on as chair of the finance committee: I would like staff to update, very regularly, the finance committee on what the status of all these projects is – RADTIP, the bond program and frankly even the rest of the [capital improvement program] … keep us in the loop on a very routine basis as to what the current estimates are, what the issues are, so that we allow the public to weigh in.”

“I think your questions are fair,” Ball replied, adding that the staff’s “primary concern” – presumably over and above communicating with anybody – “ was how to maneuver through the Federal Highway administration to be able to maintain the $14.6 million … , we were very concerned with the ability to move fast and be able to get this funding secured.”

“We can’t guarantee TIGER VI funding without approval tonight,” Ball repeated. The contract is contingent on our being able to turn dirt on August 1.

“Do you want me to go ahead and answer the other questions and concerns?” Ball asked. Wisler nodded encouragingly.

“The next phases will be very transparent,” Ball promised. “We will have a process to ask our community what they want to see funded, approved, and we will be very deliberate in how we do that.

No bids for Livingston, but they’ll get a dandy stop sign.

A major factor in the time scramble, Ball said, was that initially the city failed to garner the requisite three responses per project after bids were let in May. Law requires that in such cases, any bids received must be returned to the bidders unopened; then projects may be rebid and any and all bids may be opened and entertained. The rebidding process, which council was likewise unaware of, ate up more time, she said.

Ball then disclosed that no bids at all were received for pedestrian traffic improvements to the Livingston Street neighborhood, which had been part and parcel of the Bacoate Greenway plans. But city transportation manager Ken Putnam told council Livingston Street will nonetheless get a crosswalk in front of Green’s Grocery, as well as a newfangled stop sign complete with flashing lights.

Wisler returned to the time-lapse issue.

“What I’ve gotten from the community is the timing on the contracts,” she said. “Talk to me about the 60 days” the bids were said to be good for.

“Contractors will only guarantee bids for a certain period of time,” Ball said. “That’s why the city manager wanted to make sure that there was something I could sign tonight,” she repeated. Again.

“How could we be this surprised by the bid?” councilman Cecil Bothwell asked.” How could we not know construction prices were ratcheting up?”

“Again, that’s a very fair question,” Ball replied. “We have asked ourselves that.”

“We were very surprised to turn around less than six months later and receive bids that were in the $20MM range above that.”

“There is a lack of competition in WNC for this kind of work, which drives up prices,” Ball told Council.

Her assessment was echoed by other city staffers, who also opined that contractors are reluctant to bid on work that is not scheduled to begin for two years or more, and said this was probably particularly true in the case of the Livingston Street work.


The mayor is shocked. Shocked!

“I was shocked to hear what these bids came in at,” Mayor Esther Manheimer said. “These projects have not dropped off the list, they are now further down the list – but they’re without specific funding designations and that’s not always a good thing.”

“I did not fully understand that we did not receive any bids at all for the Livingston Street project; that certainly is a challenge in terms of deciding what to do tonight,” she said.

“It’s alarming that we don’t have folks bidding … Maybe we all need to stop what we’re doing and get a contracting company going or something,” Manheimer added. “I don’t think that delaying all this funding would be a smart decision tonight. We’re between a rock and a hard place.”

“I personally have no faith that these numbers we are giving now are going to hold,” current mayoral and former council candidate Jonathan Wainscott told council during public comment, “and I don’t think it’s appropriate to congratulate staff over and over on its thoroughness when their thoroughness is providing nothing but bad information.”


Several members of the group Asheville on Bikes urged council to direct as much funding as possible toward bike lanes and other bike safety measures, stressing that bicycling is a form of multimodal transportation and not a sport or hobby. Former councilman and avid cyclist Marc Hunt asked council to consider widening Lyman Street to include a six-foot-wide bike lane. He came equipped with cross-sectional drawings, which seemed to indicate an advance awareness that RADTIP cuts might be in the offing.

In the end the revamped RADTIP package, with its additional $6 million price tag, passed council unanimously. Hunt got his six-foot bike path. And the question of how the bid costs actually managed to increase by $26 million in two years’ time was never resolved.