If City leaders and Candidates really care about transparency, they should request City of Asheville salaries to be put on the City Open Data Portal.  Our City constantly touts being like other big cities, it's time to act like it. Look at the cities and public institutions that publish their salaries:

On June 12th we submitted a public records request according to the City of Asheville guidelines for salary information.  This was the same information we requested last year and it took them 2 months to respond.  However, this year, the City has yet to respond to our request (now going on 3 months). So, we've decided to publish their information and our previous year information:

Pre-2017 Salary Data - All Full-Time Employee
It turns out another person requested similar information and the City responded with a list of all full-time city employees, listing their name, hourly wage and annual compensation.  It is not sorted.

Here is the list of salary information, prior to the 2017 budgeted increases: 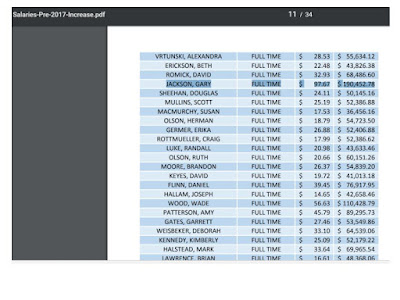 Open Data? Not for salaries

The City of Asheville and its Council and leadership have made a big deal out of being transparent and using the highest and best technology. It even makes the budget available online although, given the way the data is represented, you need to be a database expert to understand it.  Their site is:
http://data.ashevillenc.gov/

If the City truly wants to be transparent, it should make this salary information via it's Open Data portal as many other North Carolina cities do.

Carolina Public Press did an analysis of salaries in WNC and here's what they found:

Breaking down salaries in WNC -


"Of the 10 highest paid municipal employees in the region, eight work in Asheville. City manager Gary Jackson’s salary of $190,452 per year is the highest overall in WNC."