At the City Council meeting tomorrow, September 12th, the City Council will be asked to approve bond loans to be issued to the tune of $20 million in the form of short term obligation bonds (SOBS). These will be issued through the Local Government Commission.

According to the City the....


"SOBS are refunding part of the interim construction debt as well. They are used specifically in the Innovation Districts (Municipal Service Districts)."

From what we gather and various email exchanges, this is NOT new debt but is replacement debt for existing, interim construction debt.  Either way, it's debt. The City has the option to use all of that or just a portion. They have the authorization to go up to $20 million.

City places lien on City property
As collateral for the $20 million, the City will allow a lien to be put on City buildings - City Hall (70 Court Plaza), the City’s Public Works Facility (161 S. Charlotte St) and the City’s Municipal Building (100 Court Plaza).  The issued a public notice to this effect which you can see here - CLICK TO VIEW  and go to page 7 of this pdf.  It also contains the entire explanation of this debt.

Where is it going?
The $20 million is for Capital Improvement Projects and according to the City, some of it has already been spent.  See below.
To see the complete list - click on this image: 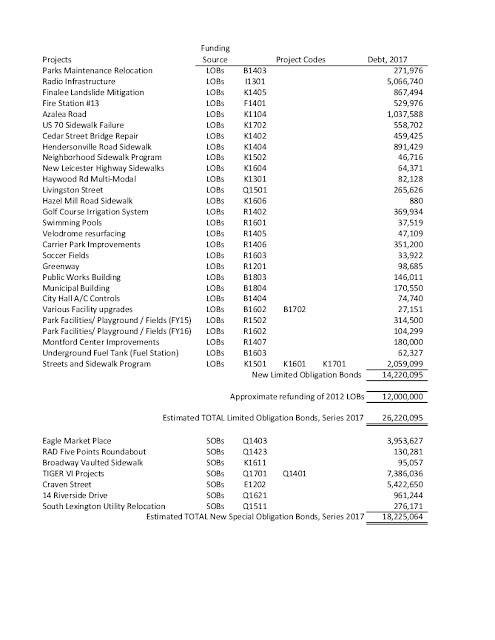 In addition, it will be asked to refinance approximately two limited obligation bonds (LOBS), one issued in 2012 with a remaining balance of $18 million and another issued in 2016 with remaining balance of $11.685 million.  The city will save on interest because those loans were short term rates and they will now be fixed rate. The total amount, including costs to refinance will be $31 million.

Where will the money go?
This money that has already been spent. The city is simply refinancing this debt.  The money was used on previous capital improvement projects - see image above.

$600,000 Cost To Issue and Refinance
The cost of finance professionals and lawyers to complete both transactions will be around $600,000.

NOTE: These bonds do not include the $74 million bonds that will be issued in the next two years.

In short, this means the City will have existing debt of $51 million. Add that to the $74 million bond plus the interest and the City will have over $130 million in debt.
at September 11, 2017
Email ThisBlogThis!Share to TwitterShare to FacebookShare to Pinterest
Labels: $74M Bond, CIP, City Debt, City of Asheville Budget
Newer Post Older Post Home