Finally, we got it.  Here's our annual City of Asheville salary update:

NOTE 2: This data was provided by the City on Sunshine Request in June 2017. We have been told that not all full-time employees were provided. We can only go by what the City provides but we have requested that the City make ALL employee salary data available on their Open City Data Portal. 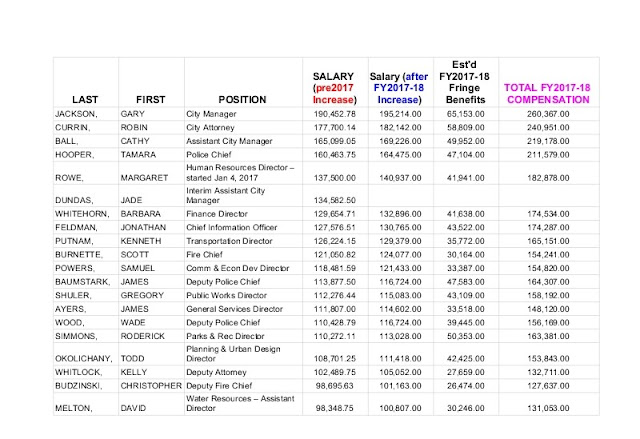 We also were able to analyze the salaries provided by the City to a Sunshine Request filed by the City on June 21st.  To see that list, click here.  Here's what we found:

There were 1133 full-time employees listed with an additional 300+ part-time and/or seasonal employees.  Based on that data, we found:

He is earning $46,577 in salary less than recently retired (and now under FBI investigation), Buncombe County Manager, Wanda Greene ($241,790) who had been with the County for 20 years where she managed a County budget of $431 million and 1,442 employees.  Gary Jackson has been with the City for 10 years and manages a City budget of $176 million and 1,248 full-time employees.


Compare to other cities:
The City of Fayetteville has a population twice that of Asheville and their City Manager earns $185,000.  Mr. Jackson is not far behind Ruffn Hall, Raleigh’s City Manager who earns $239,500.

City of Asheville vs. Median Income
Household Median Income for Asheville is $44,077 which means that is the total income of all earners in a household (over 15 years of age).  Going by that, 51% of the City’s full-time employees earn above the household median income.

It’s good to live in the City - More employees to serve fewer people
Buncombe County has approximately 1 county employee meeting the needs of 178 residents.
The City of Asheville population is almost at 90,000. For every city employee, there are 79 residents and that doesn’t count the 300+ part-time or seasonal employees.

However, according to Gary Jackson’s management letter in this year’s budget, the City faces high turnover, especially among professionals. Does Mr. Jackson think that professionals need to earn more? In this year's budget all employees received a 2.5% increase and the Human Resources Department will be conducting benchmark studies.