How to win friends and influence [Asheville] people: City of Asheville edition 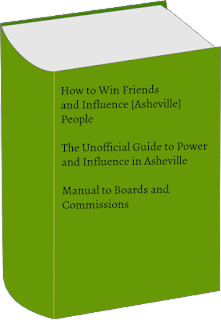 ZERO Members of Council reside in East or South Asheville

Of the known members of the City's boards and commissions, we found:

Book Note - "How to Win Friends and Influence People" is a popular self-help book written by Dale Carnegie and first published in 1936.  It's a timeless classic. The below steps follow this timeless 1936 book's section titles with a bit of our take based on the Asheville political environment.

So, how did we get this way? How did we shift to a far left Council? After closely observing our City, how it functions and the boards and commissions, we've seen this strategy develop over time.

If you're at the top of the Influence Game and in control, you need to stay in control and that means control the rules so you stay there.

State legislatures have attempted to rebalance representation with the passing in June of Senate Bill 285, Equal Representation in Asheville, that will be in effect for the 2019 city elections. Of course, city council is against S.B.285 and for that reason is putting the question before the voters in the form of a voter referendum that appears on this year's ballot.  This local referendum is NON-BINDING and will have NO LEGAL FORCE. No matter the election results, the matter of district elections in Asheville is law and will still be in effect.

So, instead of following the law, city council will once again hire an army of lawyers to challenge state law in court, hoping to only use the anticipated negative results of the referendum as evidence of local opposition to the law. The referendum is meant to serve as a general survey of public sentiment and not the approval or disapproval of a legitimate city action.

But make no mistake, this is City Council's attempt to maintain control in spite of overwhelming evidence.


Step 2: How to Make People Like You
The role of the Boards and Commissions

The top "influencers" in the City are, of course, City Council. But to get to City Council, where do you start?  The real influence begins BELOW the Council leadership - on the 32 boards and commissions (give or take a few) that meet monthly on a variety of topics and make recommendations to the City Council.  There are a few heavily influential boards - Planning & Zoning, Multi-modal Transportation, Asheville Area Riverfront Redevelopment Commission (AARRC), Downtown Commission, and the Tourism Development Authority.

Is it any wonder that these same groups produced many of this year's election candidates?


Step 3: Winning People to Your Way of Thinking
The power of Subcommittees

Another detail you may not know is that each board or commission can also create as many sub committees as it wishes. These subcommittees are not "official" members of the main committee and this is where the influence vetting begins.  This is where the main groups identify potential people to put into the greater-influence pipeline. Call it "influence boot camp."

Why the subcommittees? Because they can add whoever they want and there is no public vetting except that which is done by the main committee.  They do not require public announcement, public approval or even public listing of the subcommittees and who is on them.  Example - last year we attended a Tree Commission meeting where SEVEN new subcommittees were created.  See how easy that was to add people and spread the bureaucracy?

Ensuring Your Way of Thinking

Often, members of the ad hoc committee eventually become permanent members of the main committee, having proven their agreeable position and merit of what they can offer. We witnessed this on the Asheville Area Riverfront Commission.


Step 4: Be a Leader
The Neighborhood Advisory Committee

In Carnegie's original 1936 book, Section IV is entitled, "Be a Leader: How to Change People without Giving Offense or Raising Resentement."  This is precisely your role on the Neighborhood Advisory Committee.

If you truly want to get started with the City of Asheville government, you need to become an avid, active member of your neighborhood's advisory committee.  However, if you're a Republican, you may want to hide that fact because you will not make it far.

If neighborhood meetings aren't your thang, then become a cyclist.  The golf course used to be where deals were made with private conversations and unseen handshakes between executives and deal makers on manicured soft greens.  In Asheville, golf is out and cycling is in, especially if you add craft beer.  So, invest in a $10,000 professional bike, cycling tights and a helmet and join Asheville on Bikes or other cycling group in town. Within these small cycling groups you can pedal along with top city officials (like City Manager, Gary Jackson), council and even local journalists as members.  If you're really serious, join a professional cycling team.  At the end of the day, instead of eating fancy meals at the Country Club, you can finish off your ride or take a break at a craft brewery like New Belgium, which donates their Asheville summer concert monies to Asheville on Bikes.

If you wondered how we got this way... now you know. The top influencers are working hard to keep "their" people in the pipeline and control the rules.  Elect different people and when those people get on the boards and commissions, they can begin to change who becomes else becomes a member.

Congratulations! Once you are a member of the boards and commissions and/or are lucky enough to make it to Council chamber, you can also then reap the benefits.

If you're a member of an important board, you can reap the benefits for your organization - get insider knowledge about activities and protect your business interests. One great example of this is how many of the members of the Asheville Area Riverfront Redevelopment Commission (AARRC) have benefited from the RADTIP project (that $76 million project on the French Broad River):  Click here to read that story

Percentages based on:
286 estimated board members
174 known party affiliation
106 Ds (61%)
15 Rs (9%)
53 UN (30%)** Note that out of the 53 Unaffiliated, 38 voted Democrat straight tickets. None voted Republican. If you include the 38 Unaffiliated voting Democrat, then the real percentage of Democrats on boards is 82%
at October 07, 2017
Email ThisBlogThis!Share to TwitterShare to FacebookShare to Pinterest
Newer Post Older Post Home