Walk right in. Sit right down. Mayor, let your term roll on. 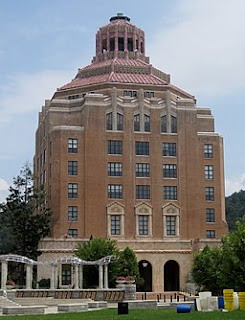 It’s been a noisy election season in Asheville this year, what with a dozen people running to fill three seats on city council and promising to do everything from tearing down the Vance monument to pushing for driverless buses to maybe doing something to create affordable housing and help disenfranchised people.
Oh, and there’s also been a mayoral election campaign going on. But it’s been a remarkably quiet one because the outcome has been a foregone conclusion for months or at least based on the silence of the Mayor and the lack of any community debates: On November 7, Esther Elizabeth Manheimer will become mayor of Asheville for another four years.

True, she will have first faced two opponents in a primary and the surviving one in the general election, but those are formalities.  The mayor will gain her second term with hardly a hair out of place, having had to exert very little effort.  Not even to defend the blotchy record she’s running – or coasting – on.
About that record …
First, a disclaimer.  Asheville employs the “weak mayor” form of city government.  Under that arrangement the business of the city is actually run by City Manager Gary Jackson and his staff.  The manager’s office – usually with little, if any, prior discussion – presents to city council any business that is deemed to require council’s approval, which is usually forthcoming.  The mayor in these cases is only one voting member out of seven.  She can speak for or against, choose issues to champion or denounce, but her record as mayor is essentially the record of what has occurred on her watch.
She took pride last year in selling city taxpayers on $74 million worth of general obligation bonds. She has positioned herself as the defender of city sovereignty against continuing “Raleigh overreach” and has called for and gotten a municipal referendum which she hopes will show Raleigh that Ashevillians are opposed to dividing the city into voting districts as a basis for choosing council members, so there.
The flip side
But dodgy ballot language has tied the much-touted GO bonds up in court for at least two years.  And the General Assembly has already passed a law creating the city voter districts, thus making the referendum an expensive moot point that will also probably have to be resolved in court to the tune of still more lawyer fees.  Now, the mayor is a land developer and eminent domain lawyer herself, and on her watch the City’s legal department in staff has doubled, at a cost to taxpayers of $1 million a year to operate. And yet the City also relies heavily on outside counsel (at least 11 other law firms recently).
Gaming the system


With her land use/foreclosure experience, the mayor has also from time to time displayed a lawyerly talent for bending the rules.  When Jackson and former councilman Marc Hunt engineered the city’s questionable takeover of the Pack Place building, Manheimer helped see to it that they had ex post facto authority to do so.  And when the Asheville Art Museum tried to sell State Employees’ Credit Union “naming rights” to the forecourt of the Pack Place property – in direct violation of the original Pack bequest – Manheimer acquiesced in giving the Art Museum authority to do that as well, two weeks after the fact.  (SECU backed off from that deal when it heard about the museum’s shenanigans.)
The devil is in the details
There have also been times when the mayor has seemed less than duly informed in money matters.  Stumping for the GO bonds last year, she claimed the city was carrying a per capita debt of only $274, which would result in a highly favorable bond rating and cause little taxpayer impact by way of debt service when the bonds were adopted.  When Asheville Unreported  pointed out that the $274 figure was a year old and the 2016 per capita debt had soared to $947, more than triple the 2015 figure, the mayor first said she hadn’t been furnished with the later figure, then said $947 was “still very low.”
“What’s a boondoggle?”
And of course, this past June, Manheimer was saddled with fielding the fallout after council was blindsided by the news that the planned development of RADTIP – the city’s sacred-cow River Arts District Transportation Improvement Project – was going to cost $76 million instead of the projected $50 million,  and also that, oh-by-the-way, the city needed to come up with $6 million in cash then and there in order to save a $14.6 million federal TIGER VI grant for the same project.  Within hours the situation was being called the biggest financial boondoggle in recent Asheville history.
Shocked!
“I was shocked to hear what these bids came in at,” Manheimer said.  Then, since the overrun had produced a massive scaling back of RADTIP, she added gamely,“These projects [the eliminated ones] have not dropped off the list, they are now further down the list – but they’re without specific funding designations and that’s not always a good thing.”


Mayor by process of elimination

On paper Asheville’s mayoral race, like its council elections, is nonpartisan.  Nevertheless it usually follows that at least both major parties will present candidates; or, put another way, that some political entity will undertake to make a showing against the progressive Democrat machine that has dominated city politics for nearly two decades.  This has certainly been true in the individual councilor races, where, despite the election’s nominal nonpartisanship, several candidates declared themselves Socialists and sought the endorsement of the local chapter of Democratic Socialists of America; and one candidate was officially endorsed by the Green Party.  But the local GOP has been AWOL across the electoral board this year and no Republican-backed candidates have emerged.

So it was thought for awhile that Manheimer might actually run unopposed.  In June  Jonathon Glover, a civic heavyweight who seemed he might offer a serious challenge, entered the race but dropped out shortly afterwards citing a lack of financial support.  This has left the mayor facing unsuccessful former council candidate Jonathan Wainscott, who had announced earlier, and Martin Ramsey, who forced the holding of a primary with his eleventh-hour entry, just as he did in 2013.

Wainscott ran for city council in 2013 as a sort of anti-New Belgium populist and became a neighborhood spokesperson for those adversely affected by the brewery’s construction, but he dropped off the political radar until this season.  The same went for Ramsey, a passionate self-declared Socialist who has repeatedly called for candidates to debate city issues publicly and in depth.

There has been, in fact, virtually no public exchange of views by the mayoral candidates.  Hatch, the Asheville business startup organization, held a city candidates’ forum in September and Manheimer attended, but observers said candidates were given a minute to state their cases, plus three minutes to take questions.  There was a meet-and-greet event at Deerfield Retirement Community where the three-minute limit was also imposed.  The Asheville-Buncombe League of Women Voters had scheduled a candidates’ forum, but abruptly cancelled it.  So much for debate.

Such a situation, of course, favors the incumbent.  The conventional wisdom is, keep your head down, say as little as possible as positively as possible, and let nature take its course.  Mayor Manheimer has stuck to the playbook, which is obviously working for her.  To date she has reported just under $8,600 in campaign contributions – a third of what she raised as a challenger – and has money in the bank with a month to go.  Ramsey shows no contributions at all in Board of Elections reports; only his filing paperwork.  Nothing at all shows for Wainscott.
So walk right in …
This piece is being written on Primary Day, which will see one of Manheimer’s on-paper opponents eliminated, leaving her to face the other in November.  But the stark fact is that, barring an asteroid strike and no matter who voters choose to fill the other council seats that are up for grabs, the chair in the middle – where the mayor sits – is spoken for.
# # # # #